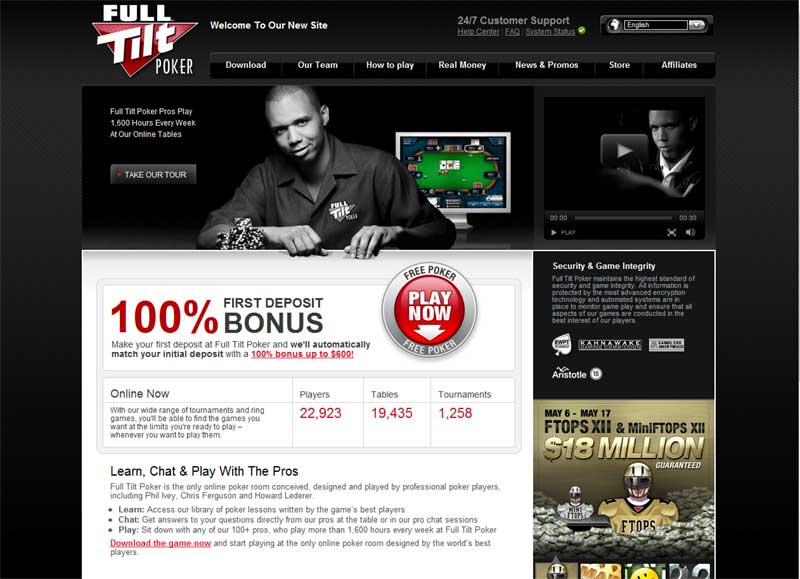 Full Tilt Poker, launched in 2004 has the reputation as being one of the biggest and most well-known names in online poker.  The company suffered a rough patch in 2011 after it was unable to pay out to it’s customers after a crash on Black Friday.  Pokerstars, a huge competitor at the time, stepped in to help and bought the site and paid out to all customers affected.  Now owned by Amaya gaming, who also own Pokerstars, the site is thriving and now focuses on the enjoyment for the online player.  The site’s software has been dubbed by some to be the best software available online today.

The games available on Full Tilt currently include, Hold’em, Omaha and Omaha Hi/Lo.  The site did have more complicated variations of poker but abandoned these in an overhaul intended to attract new and recreational players.  Blinds start low and can raise up to $30.

Full Tilt has become an industry leader in introducing innovative  ways for players to enjoy poker.  The company introduced Rush Poker to the world, which the first instance of the now insanely popular “fast-fold” poker.  Some other games that you won’t find anywhere else are Sit and Go jackpots, Adrenaline Rush and 1 UP Multi-Entry tournaments.  Although Cash games are dominated by Hold’em and Omaha spreads, there are Draw, Stud and mixed games tournaments, these are particularly prominent during the tournament and festival series.

Bonuses and Promotions on Offer

Full Tilt are offering a welcome bonus to new customers, they will match any initial deposit amount 100% up to $600.  This makes the site insanely popular with new players as this bonus amount is quite substantial in comparison with competitor sites.  Players must earn Full Tilt Points for the bonus to be released.  Players will earn $1 for every 25 Full Tilt Points earned.  It should be noted that the bonus offer will not be redeemable after the first 60 days after the deposit is made.

The software on offer at Full Tilt is rated as one of the best available to players today.  The software allows for a lot of customisation options and maybe most importantly it allows the games to flow very quickly and smoothly.  Looks wise, it is sharp, the graphics are impressive and it instills a feeling of reliability and trustworthiness.  The site has all the features that one would expect of a major online poker room.  Players have the ability to take notes and multi-table play is standard.  Full Tilt’s software will allow players to play at 18 tables simultaneously.

Full Tilt have now blocked all table selection options, players are randomly seated, another feature that attracts the recreational player as they are not able to be targeted by stronger players.  There are a number of special and unique features on Full Tilt Poker such as an auto top-up feature, automatic re-buys and a log-in history.

The software is available on Windows, Macs and android and iOS devices, meaning a variety of players are available.

The team at Full Tilt offer help on a wide variety of problems and the quality of their help is very good and the majority of the time very quick.  There is an FAQ section for customers located in the Help Centre of the website which covers almost every problem that a player could possibly have.